Expanscape Aurora 7 Laptop – Everything You Need To Know

Behold! It’s the dawn of the new era of multi-screen laptops that will soon hit the market in the next couple of years, at best. We have barely scraped the surface with foldable devices like smartphones, and we are already on the laptop with multiple screens. Seven Screens, can you believe it? Yes, in Expanscape Aurora 7 laptop has 7 screens with much more specifications. 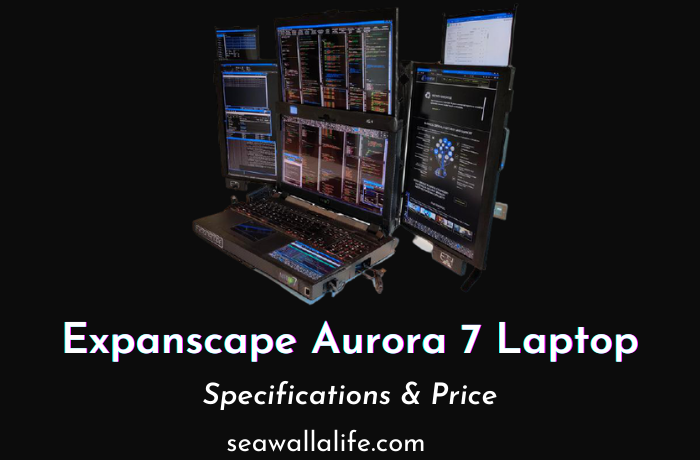 We are looking at Aurora 7. It is a laptop from Expanscape company that has made it to the spotlight and took the internet by the storm. It is coming with a 7-screen collection. There’s no doubt that this very laptop might be the future of the next generation of laptops. So, let’s take a look and cover everything you need to know!

Expanscape Aurora 7 Laptop – On The Surface

If you take a glance at the laptop, you might not like it — when it comes to design. The design is quite bulky, and it looks like those retro laptops. The old school laptop doesn’t even look like a laptop at a glance. It is one of those hideous and bulky machines. Of course, in the era of sleek technology, it won’t sell out as efficiently.

Next up, it is quite heavy, as well. It stands at over 11 Kgs, which is almost 25 pounds. We are in a world where lightweight laptops of around 1.5 kgs have become the norm. So once again, that’s a slight blowout for the laptop.

However, we can’t forget an important detail. This is just a prototype. The size is due to the hinges and screens. Expanscape plans on trimming the length and bringing us a much sleeker model for the next-gen model.

First of all, the large screen (primary) offers four 17.3-inch 4K Ultra HD display screens right off the bat and offers a brilliant 2160p resolution in each. The smaller screens are around 7-inch and offer 1200p. This is a remarkable resolution that tells the competitor that it means business!

That’s not the most striking feature of the Aurora 7 prototype at all. Here is a quick rundown on other specifications: 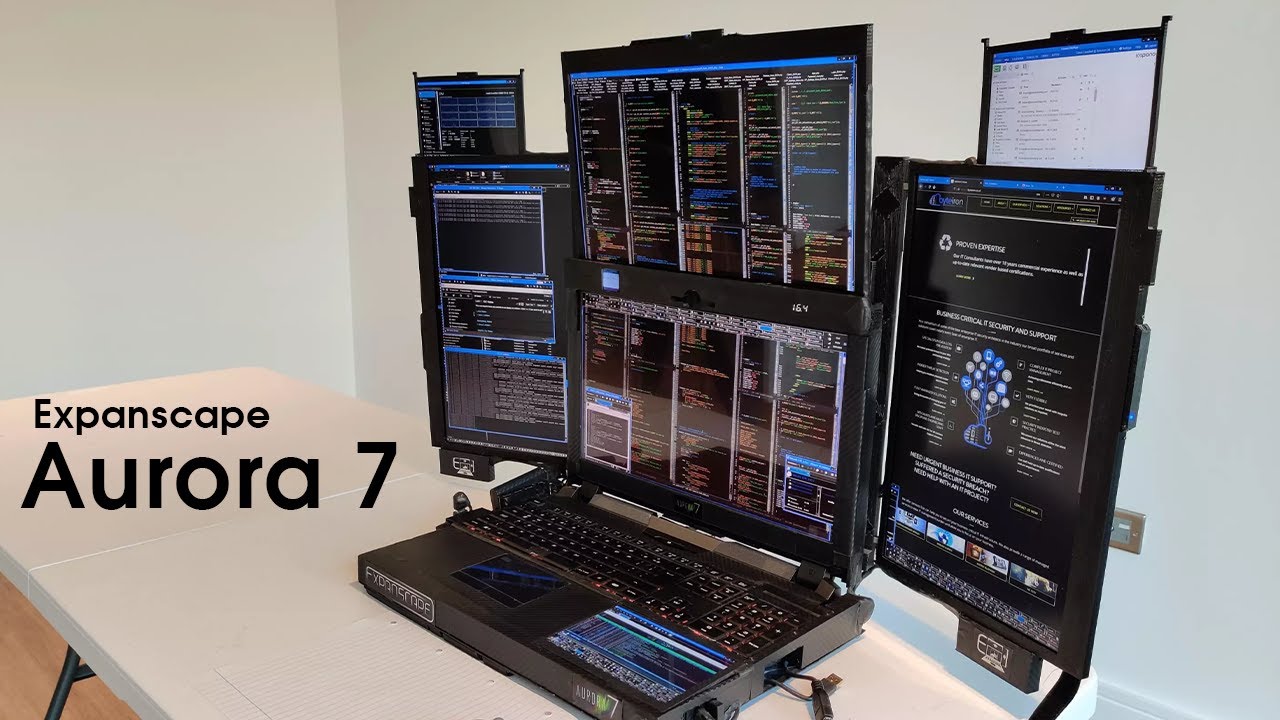 As we know that you get four 17.3-inch 4K UHD panels. There is also a 3 7-inch 1920×1200 resolution display. While two are connected to the screen, the third one (near the palm rest) is multi-touch enabled to make it easier to navigate and use the laptop to the full potential. 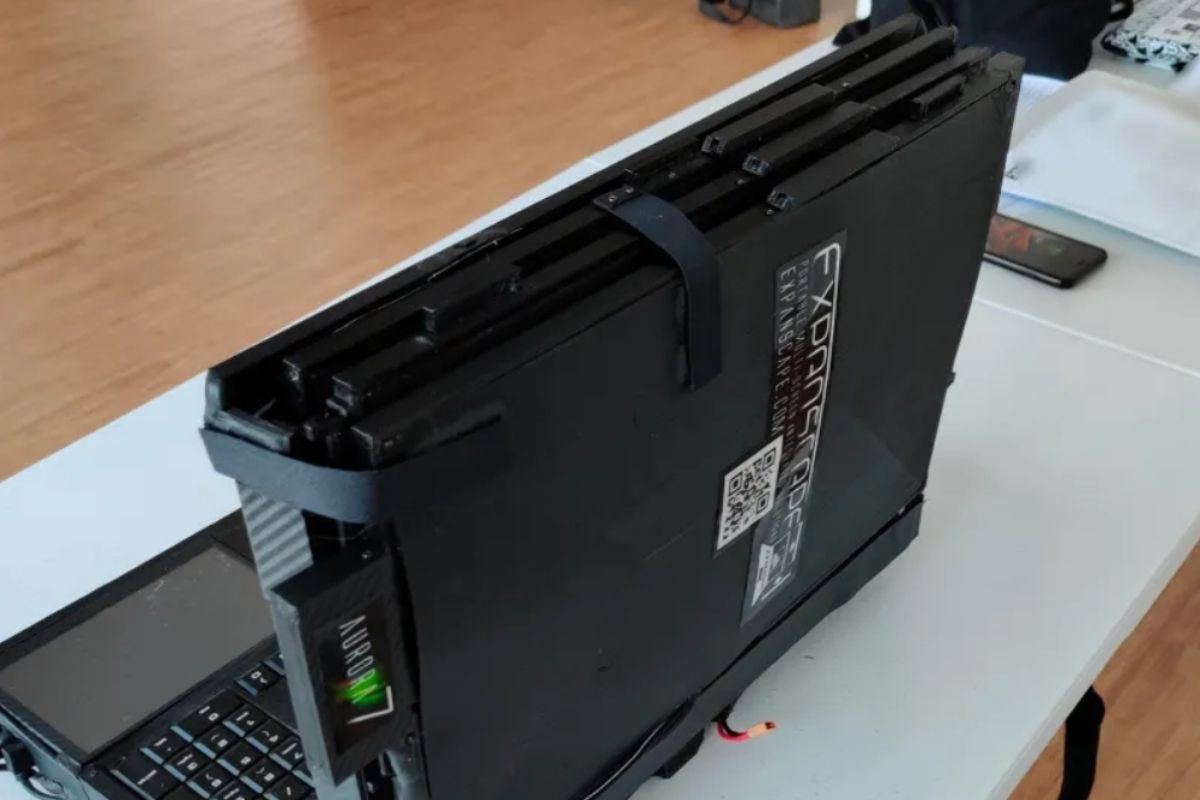 There are two variations. However, it seems like the company is focusing on 64 GB RAM for starters. However, you can get up to 128 GB of RAM for this monstrous powerhouse.

The processor boasts at least a Quad-core 8 thread Intel i7 processor that offers remarkable 4 Gigahertz of processing power. However, much like RAM, you can get an 8 core 16 thread processor with the latest Intel Core i9 9900K processor.

To ensure maximum power, you get an Nvidia GTX 1060 GPU that is just the best in class, and nothing can beat it. This further makes the laptop a complete powerhouse. 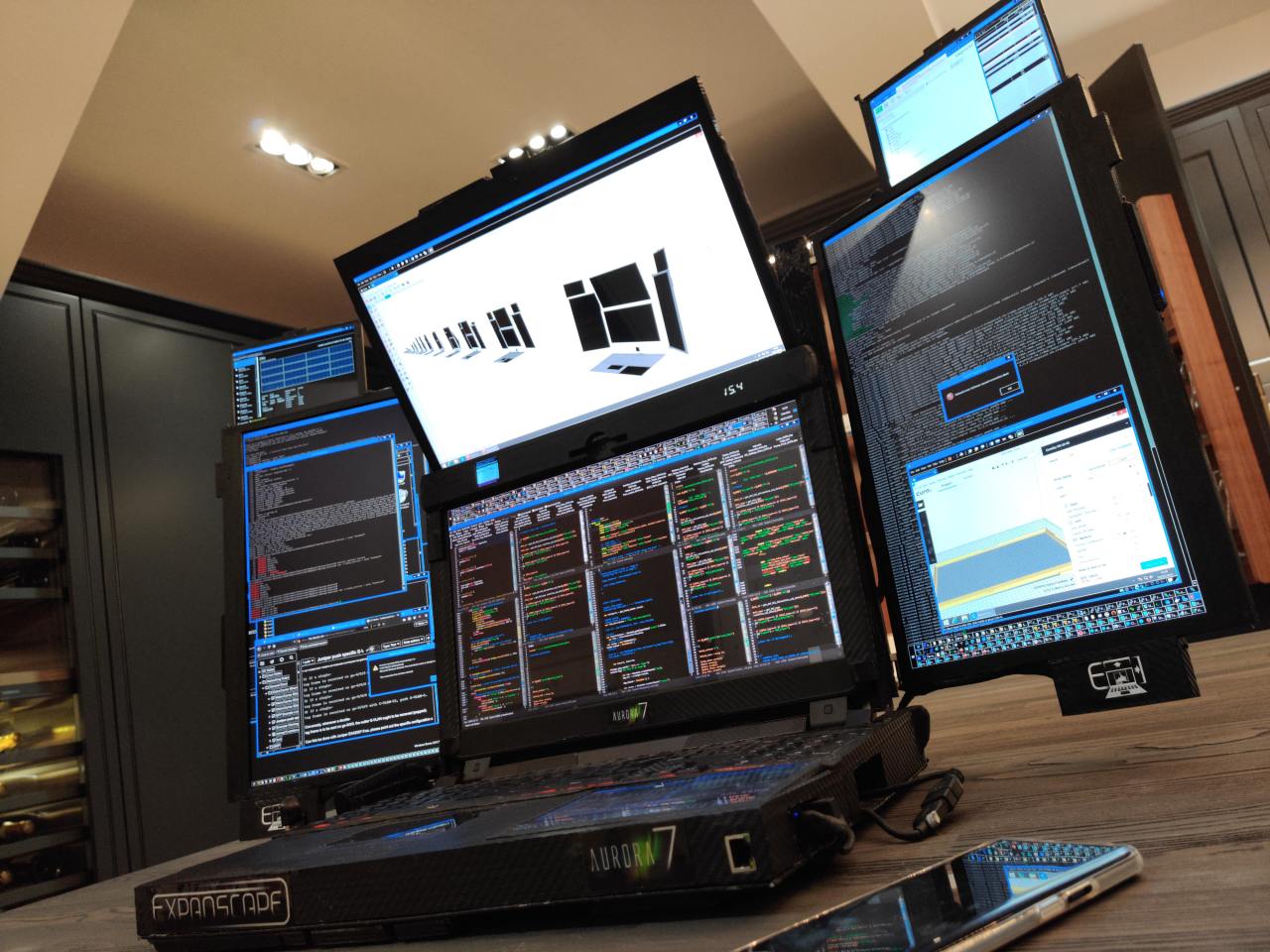 The laptop is intended to come with a 2.5 TB SSD to boost the performance thoroughly. There will be an additional 2 TB HDD to ensure that users have optimum storage space, especially for system-heavy applications and much more.

As far as connectivity options are concerned, there isn’t any slack in the design. You get multiple USB ports with the latest generation, the latest wifi, and the latest Bluetooth. Almost everything in it is best in class. It has Thunderbolt 3 and also comes with HDMI connectivity despite already having seven screens. 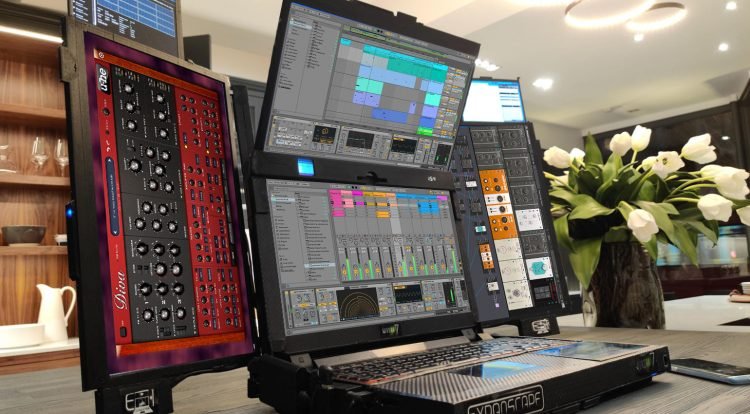 The laptop has two batteries. One is 82 wh and another one with 148 wh to power the seven screens. However, despite this powerful addition, the Aurora 7 prototype can only work for an hour or so without the power socket. The battery limit is already way above what most travel agencies (especially airplanes) will allow.

However, as this is a prototype, Expanscape also plans to make the laptop more efficient in performance.

There’s no doubt that the 7-screen laptop is power-packed with best-in-class specifications. However, it is not available for conventional sales. There won’t be any release date for the Aurora 7 prototype. It is just a reveal to check out the depth of the market and reactions.

There is one exception. If you’re a recognized or licensed content creator, data scientist, or DevSecOps, you could potentially get your hands on one of the Expanscape Aurora 7. You would have to go to the official site and register. The company will most likely weed out some buyers and find the most promising candidates to give them the laptop.

Expanscape Aurora 7 will change the laptop world’s face as we know it with the latest seven-screen laptop. However, it isn’t designed for the average joe. It is something highly intended for security operations or content creators. It is also a mobile security operations center. Hence, the powerful graphics. The displays are likely going to be somewhat limited in the task and performance. However, these specs do make it seem like a dream laptop.

There’s no doubt that it will also cost significantly more than any other laptop available. All of these specifications wouldn’t come cheap.

Is Aurora 7 Prototype Worth Buying?

As of right now, with the bulky design and heavyweight, and lack of battery efficiency, it is not worth buying. All it has going for itself is seven screens, and we don’t know how great that might be. It would be better to wait for the next generation Aurora 7 laptops. If you want, you can start saving for them from right now.

Is Expanscape Aurora 7 Great For Multitasking?

Yes. That seems to be the intention behind the laptop’s prototype. It has high-end specs that focus primarily on performance. It would be a great choice for anyone looking to set up a compact security operations center, especially for their company. Indeed, it would be a blessing for many content creators, data scientists, and many other professionals.

Is Aurora 7 A Gaming Laptop?

The seven-screen laptop doesn’t seem to have gaming as the primary focus. Its specifications are quite ‘godly’ or ‘monstrous’ to be just something for entertainment or gaming. However, there’s no doubt that it would certainly provide the best-in-class gaming experience. As mentioned earlier, the laptop system is more for other trades and professions.

That covers up almost everything we know about the seven-screen laptop and the prototype. The seven-screen settings are more of a gimmick, even if the specifications are high-end. Unless the company genuinely works on trimming down the size and enhancing battery performance, people would very much prefer to set up a full-fledged PC.

However, Expanscape made a reveal, which means that it is in for a long hustle and is already promising ‘next generation’ Aurora 7 laptops for the people. This means that this is certainly not the last we will see. We will most likely receive some of the monstrous and best-in-class laptops. Brace yourselves, guys! The world of laptops is about to change for good.

Who would not love to watch their favorite movies after getting back from work? Surely everyone is eager to wait for this moment. So...
Read more
Laptop

Are you looking for the Chromebook for your kids? Then keep your worries aside as we bring in the list of the best Chromebooks...
Read more
Laptop

Are you stuck in a debate between MacBook Air vs MacBook Pro? Well, then let me solve the debate for you, through a short,...
Read more
Laptop

If you’re looking for the best laptops for college students under $500, you’re at the right place. Getting a budget-friendly laptop doesn’t mean you...
Read more
Laptop

Chromebook vs Laptop – Which One is Best for You?

Not sure which one to buy, a Chromebook or a Laptop? Or don’t have the exact knowledge of tech specificities? Here's the answer. In the...
Read more
Laptop

A Chromebook under 300 can be a great choice for those looking for great performance at affordable rates. Sometimes, a good and sturdy Chromebook...
Read more
Sea Wall / A Life